History of Thai loincloth
.
Her Royal Highness His Majesty the King in the reign of 9 th while visiting the United States In 1960. This image that is widespread in many media in the United States And newspapers in New York.
.
" Gave praise as beautiful as the princess in the fairy tale, cheerful and cheerful by being friendly with the audience He dressed in western style with the most beautiful Thai silk. And was a queen from a far country that could speak English And France are fluent." 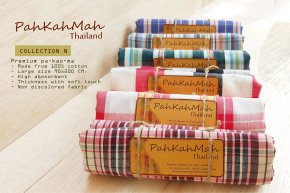 The Beaty of Handmade Cotton